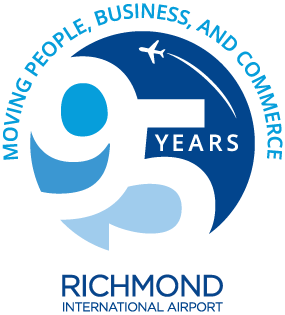 It’s been a busy five years since we celebrated a major anniversary. In that time we've grown even prouder of contributing to Richmond's history and its future.

RIC welcomed new airlines that made our region more accessible while connecting us to exciting destinations. We saw a change of command for the first time since 2000 with the installation of a new CEO. Through the challenges of a pandemic, we rose to the occasion by achieving GBAC Star accreditation to continue to protect the health and safety of our passengers and employees. And we recommitted ourselves to efforts in sustainability.

Along the way, we set a record-high annual air cargo volume of 180 million pounds. And we continue to generation nearly 16,000 jobs and contribute annual economic activity of nearly $2.1 billion for the region.

RIC is proud of our position as the gateway to our region and the positive impact we continue to make in the community where we live and work. Here's to another 95 years of achievement, progress, and service.

It’s hard to believe, but we’ve been the gateway to Virginia’s Capital Region since 1927. Our central location attracts more than 3 million friends, family members and business visitors traveling to and from Fredericksburg, Williamsburg, Washington D.C., Charlottesville, Virginia Beach, and points to the east and west each year.

If it’s been a while since you traveled through Richmond, you may not recognize us. Our $300 million renovation was designed to make your experience as convenient and stress free as possible. Entering and parking at the airport have never been easier, and our terminal has been transformed into a sleek, modern space with additional gates and ticketing counters.

It’s been said we’ve successfully balanced the sophistication of a large airport with the charm and convenience of a smaller one. We hope you’ll agree.

Ready to go? RIC is simply the most convenient and hassle-free option in the region.

The Airport’s vision: Moving people, business, and commerce to advance the Richmond region.

The Airport's mission: RIC seeks to provide all customers with an exceptional experience through convenience, innovation, and excellence.

In pursuit of this mission, the Commission recognizes the importance of providing choices for the traveling public by supporting competition among its nine airlines: American Airlines, Breeze Airways, Delta Air Lines, JetBlue Airways, Southwest Airlines, Spirit Airlines, Sun Country Airlines, United Airlines, and Allegiant. The success of each of these airlines is invaluable to providing a high-quality and competitive air service marketplace for the citizens of Central Virginia.

Efforts to encourage competition over the past decade have resulted in a decrease in fare premiums and an increase in quality and frequency of service. Competition has also led to an increase of roughly one million passengers traveling through the Richmond International Airport, including travelers who previously drove to other airports to take advantage of lower fares. This increase in passengers, coupled with significant savings on ticket costs, has resulted in an increase in local spending and injected millions of additional dollars into the region's economy.

In order to ensure that these airlines remain in the Central Virginia market and to sustain competition, the Commission strongly encourages ridership from Richmond Region travelers on all eight airlines. Competitive air service provides passengers with more choices of carriers to more destinations at lower fares and creates a marketplace in which all airlines can succeed.

Our central location within Virginia and the mid-Atlantic region attracts over three million travelers each year, enough to keep our “Open V” runway configuration in a steadily busy state. The airport has three asphalt-grooved runways to accommodate traffic, with the longest runway measuring 9,003 feet in length by 150 feet in width.

While we typically handle about 105,000 operations annually (landings/takeoffs), the airport has the capacity to accommodate about 225,000 operations in its current configuration.

For an FAA listing of current NOTAMs, go here.

For more than a decade, the Commission's Finance Department has annually received a Certificate of Achievement for Excellence in Financial Reporting from the Government Finance Officers Association of the United States.

Richmond International Airport is one of the busiest air cargo facilities in the nation. In FY2021, RIC handled more than 180 million pounds of cargo - an annual record -  via dedicated cargo carriers like Amazon Air, DHL, Federal Express (FedEx) and United Parcel Service (UPS). These airlines offer a number of shipping, receiving, and storage options, including shipments of high-security and temperature-sensitive freight, fast international delivery, and overnight and priority deliveries for businesses and individuals.

Our staff is dedicated to ensuring your visit to Richmond International Airport is safe and enjoyable. Please see below a listing of senior staff:

If you have a question or concern about the airport, please contact us.

We’re proud to have been serving our region for 95 years. On October 15, 1927,
the airport was dedicated as Richard Evelyn Byrd Flying Field in recognition of Virginia-born naval officer, explorer, and aviator Richard E. Byrd.

A Partner in Growth

Always a vibrant city, our region is now the 45th largest metropolitan statistical area in the country with almost 1.3 million residents. We offer eight major carriers and nearly 150 daily flights to support visitors and residents alike.

We believe everyone deserves a voice in the conversation and a seat at the table. Thanks to our commitment to diversity, the Capital Region Airport Commission was recognized with a Metropolitan Business League of Excellence Award, and our President and CEO, Perry J. Miller, was named the Virginia Department of Aviation’s Airport Manager of the Year.

Stewards of Our Environment

RIC has been a Certified Green Travel Partner since 2015. The title recognizes hotels, restaurants, and attractions committed to reducing energy and water usage, and increasing recycling measures.

Dedicated to Our Community

From food donations to Feed More to back-to-school supply drives, we do everything we can to give back to the community we serve.

With the extension of Concourse A, we’re giving domestic and international travelers an even more exceptional experience. Now RIC offers two balanced concourses featuring a total of 28 gates.

Gateway to Our Region

In 2019, RIC set a new annual record of 4.38 million passengers. As we climb toward prepandemic travel levels, we are excited about serving current residents, welcoming past visitors, and greeting new travelers to our region.