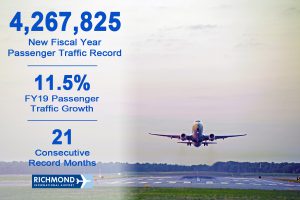 “We have accomplished so much together,” said Jon E. Mathiasen, A.A.E., in his final meeting as president and CEO prior to retirement. “This commission is a best example of the four participating jurisdictions working together for the betterment of the Richmond region.”

Cargo
Total cargo, measured as a sum of freight and mail, decreased 2.9 percent in June, but increased 2.5 percent in FY19 to more than 140 million pounds.

Financials
For FY19, the Commission’s operating revenues totaled $52.9 million, greater than budget by $5.7 million (+12%). Operating expenses for the same period amounted to $26.4 million.

Briefs
Additional items discussed at the monthly Commission meeting include:

Seven major airlines offer nonstop flights from Richmond International Airport (RIC) to major domestic destinations and connecting options to points around the world. The activities of RIC and its tenants create nearly 16,000 jobs and contribute $2.1 billion in economic activity annually to the Richmond region, according to the Virginia Department of Aviation. Annually, RIC welcomes more than four million passengers. For more information, please visit www.flyrichmond.com.