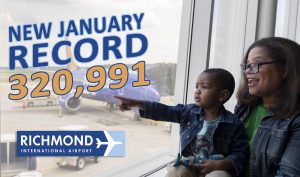 Total cargo, measured as a sum of freight and mail, decreased 3.9 percent from last January, to 10.95 million pounds (4,967 metric tons).  For the fiscal year to date, total cargo handled at the Airport is off 0.9 percent.

Richmond International Airport (RIC) is one of the most modern airports in the eastern U.S. Seven major airlines offer nonstop flights to major domestic destinations and connecting options to points around the world. Activities associated to the Airport create nearly 16,000 jobs and contribute $2.1 billion in economic activity annually to the Richmond region, according to the Virginia Department of Aviation’s most recent economic impact analysis.