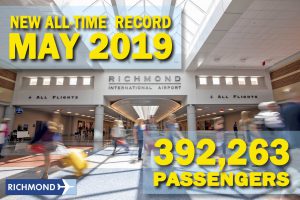 At the June monthly meeting of the Capital Region Airport Commission, Richmond International Airport (RIC) reported that May 2019 set a new single-month record of 392,263 passengers, surpassing the previous mark established in August 2018 (383,272). This is the fifth occasion since October 2017 that an all-time monthly record has been reported by the Airport.

Compared to the same period a year ago, RIC reports a 9.7 percent increase in total passenger traffic. Delta Air Lines was the market leader in May with 32.0 percent share of passengers, followed by American and United. Six airlines reported year-over-year growth, including Allegiant (+89.9%), United (+17.8%), and American (+14.6%).

Additionally, the Commission closed 23 capital projects that had carried a total budget of $27.7 million. The projects ranged from the construction of compressed natural gas stations and vehicle acquisition to automatic door replacements, apron and taxiway rehabilitation to terrazzo refinishing.

Now you’re going places with Richmond International Airport (RIC).  Seven major airlines offer nonstop flights to major domestic destinations and connecting options to points around the world. The activities of RIC and its tenants create nearly 16,000 jobs and contribute $2.1 billion in economic activity annually to the Richmond region, according to the Virginia Department of Aviation. In 2018, the Airport welcomed more than four million passengers. For more information, please visit www.flyrichmond.com.